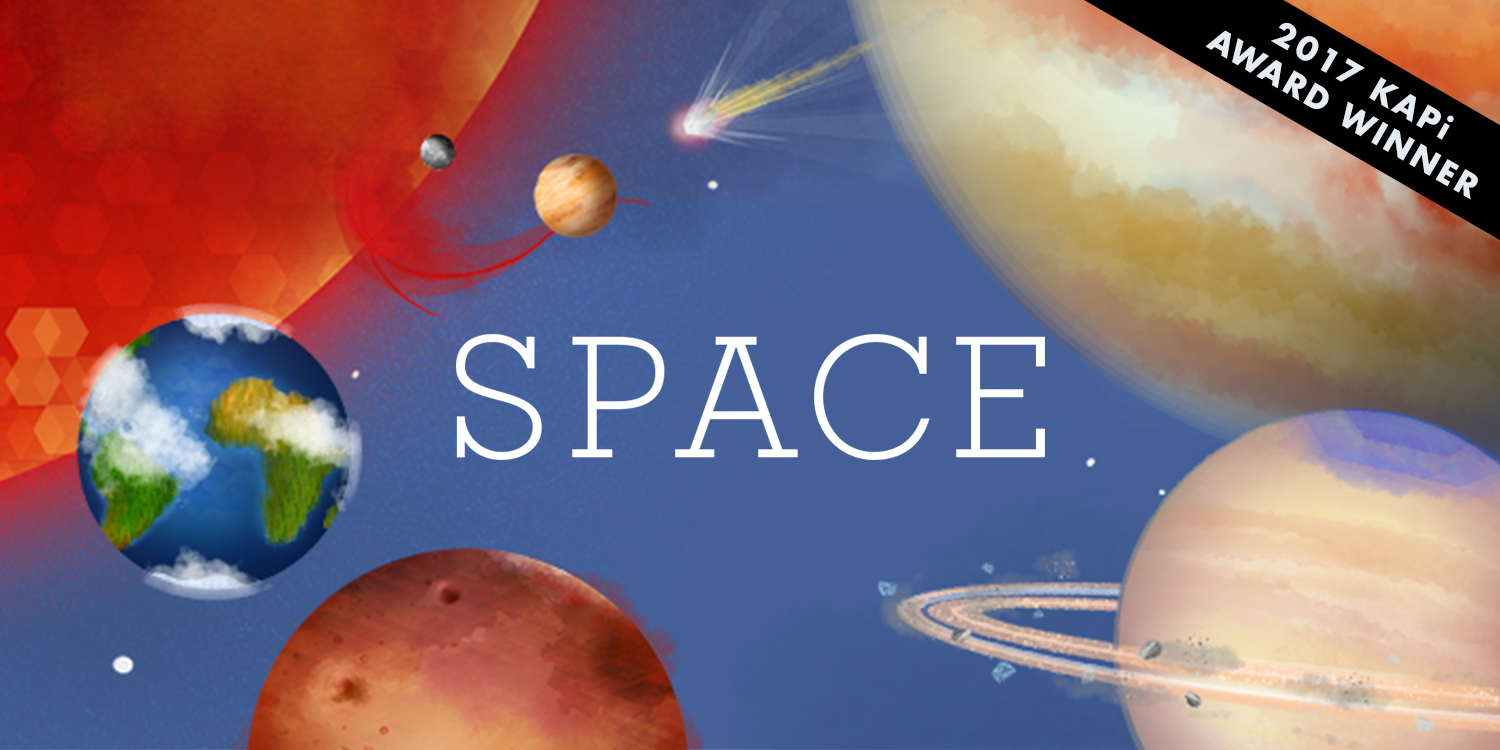 We’re excited to share that Space won the 2017 KAPi for Best App for Older Children (8+).

KAPi (Kids at Play Interactive) is an annual award granted by a panel of experts in interactive children’s media, who select winners based on design “innovation and excellence.”

When we were creating Space, we wanted to build an app that was fun and informative, giving kids an interactive model of the solar system that they could both learn from and play with. Kids can compare and contrast the size and mass of every planet, hurl meteorites at Mercury to study craters, and tag along with robotic rover Curiosity in search for water on Mars, so we like to think we accomplished that. We’re proud that KAPi recognized Space, and thankful for our community of kids, parents, and educators who support our apps.

We’re also honored to be among great company! Seymour Papert was posthumously given the Career Legend award for his influence on “how millions of children around the world create and learn.” He is a hero to us all at Tinybop for his revolutionary ideas about education technology, believing that children could use computers to learn, experiment, and express themselves. Reshma Saujani, founder of Girls Who Code, received the Emerging Legend award and is a huge inspiration to us for her work in closing the gender gap in technology.

This is the second time a Tinybop app has won a KAPi Award. In 2014, The Human Body was awarded a KAPi for the Best App for Older Children (5+). We’re humbled by this recognition, and excited to share what we have planned next.

We received a KAPi Award!

We’re delighted to share that The Human Body has been awarded the 2014 KAPi for Best App for Older Children (5+). What an honor!

KAPi (Kids at Play Interactive) is an annual award granted by a panel of judges expert in interactive children’s media. The final picks are made based on a mix of design “innovation and excellence.” Past winners include some of our favorite toys and games, including Minecraft, Doodlecast, and Scratch. For the 2014 award, we’re proud to be included among great company.

When we set out to build The Human Body, we hoped the level of research, thinking, and care we poured into it would produce a fun, informative app for children and parents alike. Our thanks to KAPi and our amazing community of parents, educators, and kids for exploring The Human Body. We can’t wait to show you what’s next.