The Travels of Thelonious (The Fog Mound Series) 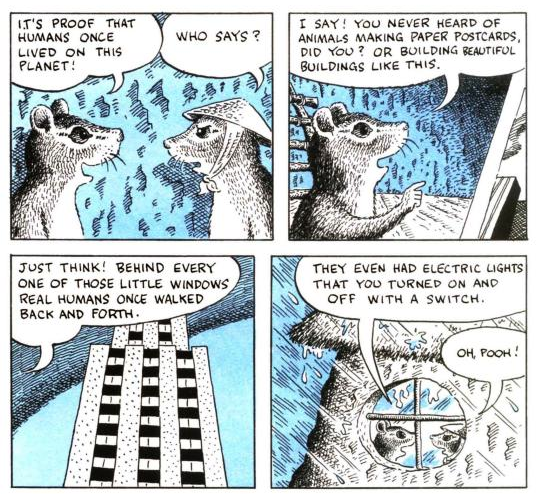 Animals of the future ask: did humans ever exist?

The first book in the Fog Mound series, The Travels of Thelonious is a bit like a kinder, gentler Planet of the Apes (but in reverse; imagine that Cornelius goes out searching for humans). The hero of Travels is a chipmunk living in a world populated by talking animals who wonders if humans ever existed. Thelonious is intrigued by an old legend that begins: “In ancient times, when human beings ruled the earth and the animals did not yet have the gift of language, there was born a certain human baby, and he was named Bob…” The book presents young readers with a fantastic world complete with bear helicopter pilots and soup-making porcupines. The book engaged my kid so much so that he read it straight through, refusing to eat or sleep until he was done. I liked that the series is a chapter book/graphic novel hybrid, a form I wish more children’s authors would experiment with. The other two books in the series are equally appealing. I hope for more.

Find The Travels of Thelonious at your local library.