Infinite Arcade by Tinybop from Tinybop on Vimeo.

Our app Infinite Arcade lets kids create and play their own video games: platformer games, adventure games, ball and paddle games, pinball, mazes, or anything else they can come up with. (Watch the trailer above!)

When we started researching for this app, Raul brought in a simulator with thousands of games on it. For better or worse, several of us crowded around it doing "research" during our work days.

While we didn't exactly fight over the control, we did eagerly await our turns to show off tricks or an obscure game we were obsessed with as kids. We dug into the game mechanics, wild visuals, ominous sounds, unique characters, and crazy worlds.

Both our memories from playing these games as kids and the hours spent playing them again together inspired our work on Infinite Arcade and we hope they'll inspire you to make many more awesome games in the app.

[Ed. note: While this post features images and links about video games we played as kids, a few may not be considered suitable for kids under thirteen by modern parenting standards. But we all turned out just fine, right?!]

PC games
The first video games I ever played were on the PC. Tetris, Breakout, and SkiFree were some of my favorites. The graphics were basic, but the game mechanics were addictive. At school, I'd breeze through Mavis Beacon Teaches Typing, so I could get a few games in before the bell (or before the teacher noticed).
—Leah, Product Manager

007 GoldenEye
I started out playing lots of Mario Kart and I'll always be a fan of Mario, but when 007 GoldenEye for Nintendo 64 was released, it was a game changer. It was the first first-person shooter game I ever played. The level of narrative, suspense, scary sounds, and visuals stood out compared to the rest of the games we'd been playing. That we were playing in a basement almost as creepy as the game's setting definitely added to the effect.
— Leah, Product Manager

Day of the Tentacle
As a kid in the 90s, we'd play these great old adventure games, mostly the ones by LucasArts. Day of the Tentacle (recently remastered for modern systems!) was one such game. It is wacky and weird and has you collecting all sorts of items in an effort to solve puzzles and further your story.

To give you an idea of just how wacky weird the game is: to solve one puzzle, you have to enter a mummy into a "best human" contest. In order to win "best smile," you have to steal teeth from a horse.

My brother and I would get stuck in a particular spot and then spend the rest of the day periodically thinking of different things we'd want to try to solve it when we finally got home from school.
— Rob, Senior iOS Engineer

Puzzle Bobble
At the movie theater in the town where I grew up, there was a freestanding arcade game of Bust-A-Move (also known as Puzzle Bobble outside North America). Video games and arcades were typically off-limits for me, but for some reason, I asked my mom if I could play, "just once!" I didn't even know what the game was, but I loved the cute graphics and the funny sounds it would play when we walked by.

So my mom let me play one round. Then she wanted to play a round. Before we knew it, we were showing up early every time we would go to the movies to play Bust-A-Move.
— Jessie, Production Designer

Aladdin
If I could get the Sega out of my brother's hands, Aladdin was the first game I'd play. After years of playing the green and black Gameboy, full color games were magical. Being able to control the characters of my favorite movie let me imagine I was inside their world. [Ed note: a whole new world?]
— Leah, Product Manager

Word Rescue
School was the main source of "video games" for me. They were, of course, always educational, and time was rarely allotted for playing them. The one game that EVERYONE loved and fought over was Word Rescue. In the game, you were a kid exploring different platform worlds, looking for spelling words that had been stolen by little monsters that didn't know how to read.

The worlds were all different and exciting to discover, and the educational value was cleverly cloaked by the gameplay and graphics.
— Jessie, Production Designer

Mario Paint
The undo button shaped like a dog. The flyswatter mini-game that seemed to appear out of nowhere. The tulip-, mushroom-, and Yoshi-shaped musical notes. Mario Paint was the first video game we owned, and my brother and I would play it for hours. It shaped my preference for surreal, joyful games like Katamari Damacy, Flower, and of course, Super Mario Maker.
— Ashley, Research Associate

Samurai Shodown
Around the same time as GZA’s Liquid Swords came out and I got my first pair of Nike Air Jordans, I remember stopping by a small bodega on Amsterdam Avenue to stuff my face with Now & Laters and dump several dollars into either Mortal Kombat or Samurai Shodown. I was mesmerized by Mortal Kombat’s gruesome fatalities but gravitated to Samurai Shodown for its anime characters and snippets of Japanese folklore. Plus, it was more forgiving of my button mashing.
— Max, Production Designer

Tony Hawk's Pro Skater
I thought I was really cool because I skated. I would've been even cooler if I was actually any good at skateboarding. Instead, I was ridiculously good at Tony Hawk's Pro Skater. The first game on N64 got me into skater culture, from the clothes to the music. Even if the game felt nothing like skateboarding, it was arcade-y fun, had a great atmosphere, and was cool to both nerds and skater kids.
— Cameron, Junior iOS Engineer

Banjo-Kazooie
The best character design I've seen in any game ever: take object and add googly eyes. The main characters were Banjo, a bear who wore pants (but no shirt) and Kazooie, a bird who just chilled in Banjo's backpack.
— Cameron, Junior iOS Engineer

Yoshi's Story
This is the only video game in my memory that ever got me to hole up in the basement for hours on end. It's essentially one long pop-up storybook in video game form. I was really drawn to the storytelling element and preserving Yoshi's mood throughout Story Mode.
— Holly, Production Designer

Myst
My earliest memories playing video games were Pitfall and Pong on an Atari 2600, but the first games that really engaged me were strategy-based and puzzle PC games like Sim City, Populous, and Myst. Myst was such a big deal. I can’t even remember if I ever beat it. All I remember is no other game felt remotely like it felt to play Myst. It was so atmospheric and deeply creepy to me at the time.
— Brian, Sound Designer

Lion King
I played a lot of Sega games in the car. Lion King was my all time favorite next to Sonic, but I remember loving the theme music, Simba's little digital roar, and thinking the hyenas were the most terrifying things of all time.
— Holly, Production Designer

Space Invaders
I mostly wasn't allowed to play video games. But at some point, my dad had a Commodore (I'm not sure which version) that I got to play two games on, one of which was Space Invaders. It was super simple: just green and black, very minimal graphics but I remember cranking on the round paddle so hard I thought it was gonna break in my hands.
— Sara, Editorial Consultant

Street Fighter
My brother and I were born exactly a year apart and we had joint parties for many of our early birthdays. We were often given joint gifts, like PC games and gaming consoles, as a result. Through the years we always played these games together and considered each other equal in abilities or would show each other how to improve. He's such a great sibling!

It wasn't until I started playing Street Fighter on Sega Genesis with my two male cousins that things started to change. I always chose to play as a female character and I often won. It got to a point where they started refusing to play with me or telling me I could only play if I chose to play as another character. They didn't like the idea of being beaten by a girl virtually and in the real world! It made me even more determined to succeed because my 9-year-old mind couldn't fathom being held back by my gender. Girls are gamers, too!
—Kika, Head of Community

Burger Time
This game is about making burgers by having the Chef run over different parts (eg patty, bun, lettuce) to drop a level in the assembly-making process. It also involves avoiding enemy foods such as Mr. Hot Dog, Mr. Pickle and Mr. Egg. Need I say more?
— Melissa, Head of Design

Night Stalker
My sister and I would take turns playing this game at my family's vacation home in Pennsylvania. The game was on the Intellivision which had a unique controller consisting of a disc and number pad. The games came with plastic cards that you would overlay the number pad with, making a unique user interface tailored to the game.

The premise of the game was to survive different waves of attacks from robots that would get stronger and have more abilities as the game progressed. You start off in a bunker and eventually have to make your way to find weapons on the map while avoiding other creatures such as bats and spiders. There was no music in the game, just a creepy pulsing noise that made you feel even more isolated.
— Andrew, Junior iOS Engineer

Final Fantasy IV
Final Fantasy IV (or II in the U.S.) was one of my favorite games as a child. It was the first game I played that had a complex story of love, betrayal, loss, and redemption as well as a large cast of fascinating characters.

My favorite part of the game is when the main character has to pass a trial facing his past self in a room of mirrors in order to become a paladin. The only way to win the battle is by parrying the attacks which, for that type of game, was unique and something I really liked.

The music in this game, composed by Nobuo Uematsu, is also some of the greatest I’ve heard in a video game.
— Andrew, Junior iOS Engineer

Marble Madness
At our house, we decided against the standard PC or Mac choice and instead opted for an Atari ST, which is not to be confused with the Atari game console—this was a full-fledged computer! One of my favorite games for this system was Marble Madness, in which you had to guide a marble across treacherous terrain and past Slinky-like enemies. It was impossibly hard to play, but, as an eight-year-old, that made it all the more fulfilling to complete a new level.
— Russ, Senior iOS Engineer 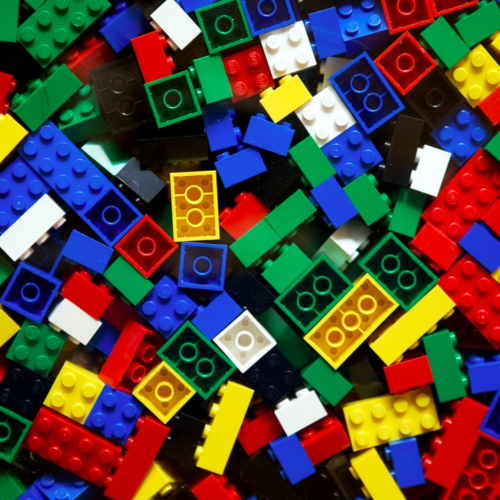 Like many kids, our Senior iOS Engineer, Rob, was a little obsessed with Lego when he was younger. He remembers specifically, “the Technic Lego line which let you put gears and motors and pneumatics together to make some crazy moveable things.” From those parts, he built a four-legged walking creature.

Lots of us at Tinybop have strong memories of diving into buckets of Lego bricks and other toys that let us design, create (and, often, destroy!) whatever we could imagine. Here are a few that helped inform the thinking behind our series of apps, Digital Toys.