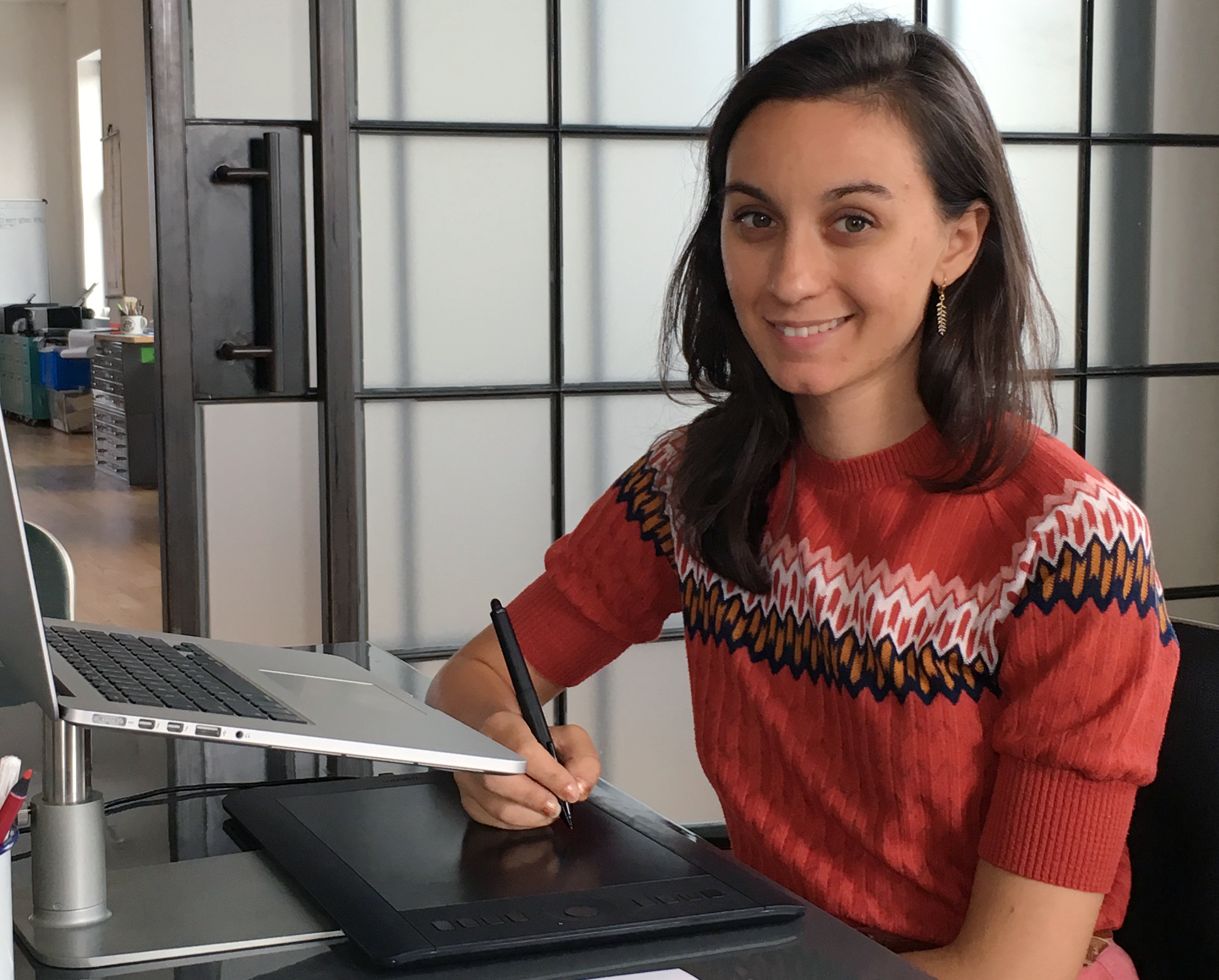 We love collaborating with different artists to create the artwork for our apps, and were delighted to have Jessie Sattler, one of our own technical artists at Tinybop, design our latest app, Space.

At Tinybop, Jessie works to translate hundreds of pieces of an artist’s illustrations into working parts for the dev team. We had the chance to sit down with Jessie to ask her about her inspiration and process for creating the gorgeous artwork in Space and what it was like to work on the first 3D Tinybop app. Some of her inspirations may inspire you, too.

Tell us about your process for illustrating Space by Tinybop. What were your first steps?
I started the project with a lot of reading and visual research. The Planets was my go-to reference throughout the project for realistic renderings and facts about planet composition and material makeup. Then I started drawing all of the planets, combining what the materials looked like physically with how I imagined they would feel. I also enhanced elements that could lend to each planet's personality and temperament, highlighting what makes each planet unique. After working on the main celestial bodies, I made all of their moons, dwarf planets, and any man-made objects in space.

As a technical artist at Tinybop, I was able to work alongside the team, so it was easy for me to go back and forth with my illustrations, making any tweaks that would help better translate elements for an interactive, animated environment.

What was your inspiration for Space?
Space is so inspiring on its own, so the beauty and mystery of it kept me excited throughout the project. I loved researching how people have viewed space throughout history, and how they visually represented celestial bodies as understood from Earth. Reading centuries-old explanations of natural occurrences, like meteor showers and eclipses, was helpful in designing an app for children. Most depictions were made by observation and imagination, akin to how children begin to understand mysteries of the world.

The Book of Miracles was a source of historical inspiration; it's not only beautiful, but also entirely mind-boggling. It's an illustrated manuscript from Augsburg, Germany, adorned with gorgeous Renaissance paintings depicting celestial phenomena on Earth as explained through practical concerns of the 16th century. Some things seem ridiculous to us now that we understand them through scientific explanation, but what is more exciting is how some century-old questions are still relevant and elusive to us today.

What did you turn to for references?
Rather than looking at photos from space or artists' renditions of planetary conditions, I tried to find reference of natural elements that already exist here on Earth. My image bank holds the likes of: lava flowing into a steaming sea, an overturned iceberg, and thick cloudy streaks of rain evaporating before they hit the ground.

What was the most interesting challenge you encountered while illustrating for Space? How did you overcome it?
Planets are made up of a vast range of materials, including elements that don't exist on Earth. Translating them into tangible, interactive parts was my biggest challenge. Substances like liquid metallic hydrogen and electrically-charged solar plasma were especially difficult to visualize. I had to find a balance between what they actually look like and what techniques I could use to help a kid feel and understand what each planet is made of.

Space is the first app that Tinybop has done in 3D; what was it like designing in 3D? What aspects of it were challenging and what aspects were fun?
Creating 2D art for a 3D environment is quite a challenge. There were visual compromises I had to make, but there were also some amazing things that would only be possible through this technique, like spinning the planets around and using realistic lighting. It was a lot of fun to see the solar system come to life and be able to manipulate celestial bodies in a 3D space.

What is your favorite part or feature of Space?
My favorite part is the reveal of planet interiors and their interactive layers. In reality, we can't explore the inside of planets, but in Space, kids can ripple through Uranus' sea of diamonds or push Venus' molten rock to its surface.

Was there anything you learned while researching for or illustrating Space that you found fascinating or surprising?
Working on Space has made me a total space nerd. I have learned so many fascinating things about what we've discovered so far and what mysteries are still out there. The planets' many moons are the most eye-opening and beautiful things I've learned about. I had no idea that each moon was so unique and beautiful; from Enceladus, with its icy geysers that compose one of Saturn's rings, to sparkling Triton, one of the coldest places in our entire solar system.

Are there any personal projects that you're currently working on or planning that you can share with us?
Nothing professional, but I'm always tinkering with things on the side. My boyfriend is an app developer, so we regularly collaborate on programming experiments, mostly with locomotion, physics, and silly characters.

Where do you look for inspiration in general?
I always feel renewed and inspired after spending time in nature. I live and work in Brooklyn, so it's super important for me to get out of the city as much as I can and into the woods to visit trees, water, sunlight, and fresh air. I'm especially drawn to cyclical patterns and changes: the moon, seasons, growth, and decomposition. I often quickly sketch not only what I see, but also what feelings are evoked in me, exaggerating certain elements to highlight more emotive traits of the natural world. I have a sense of kinship with nonhuman, living things, so I find comfort in personifying and befriending things like acorns and lily pads.

When did you first start illustrating and what made you want to pursue illustration as a career?
So, I'm actually not an illustrator! Or at least I have never thought of myself as one. I went to art school as a graphic designer, studied art history, and did a lot of printmaking. It's not until more recently that I started to explore drawing, just as a way to let out some of the weird things that are in my brain. As a technical artist, my job is to bring other people's art to life on screen, so it has been especially exciting to use my own drawings and to see them emerge from flat files to fully interactive playscapes.

What do you enjoy about illustrating for children?
Kids are the best; I find their curiosity and cleverness inspiring. I playtest our upcoming apps with my young cousins, and they always find things in the apps that I didn't even know were there! Space was an especially wonderful subject to have the opportunity to draw. I love that my artwork allows children to explore the universe just like we, as humans, are actively doing. Opening up an interactive world, letting them touch and experience different planets, and hold outer space in their hands is absolutely fascinating.

Finally, what advice would you give to a young illustrator?
To a young illustrator, designer, or any creative person in general, I would say make things that make you happy. If you try to tailor your work to please others, the outcome just won't be as good. But, if you work on things that you have a genuine interest in, projects that tickle your personal fancy, or even just a style or technique you enjoy using, it will show in your work. It took me a while to figure this out, but as soon as I started drawing what I wanted to draw, and not what I thought others wanted to see, my work was immediately better and more well received. And even if it's just on the side or for fun, the projects that you do to make your happy will change the way you approach less interesting tasks. 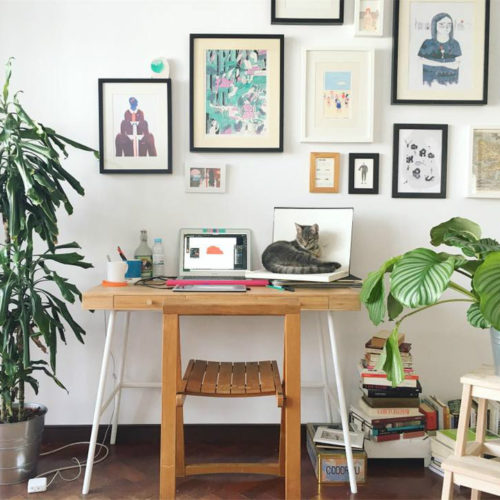 Meet Ana Seixas, the illustrator of Me: A Kid’s Diary

We were curious about Ana's process, inspiration, and how living in Portugal and Spain influences her work. Here's what we found out.