Science is a set of facts & other misconceptions

Remember The Flintstones, the animated television series from the 1960s, in which a prehistoric family scrambles about in a stone car and cares for their pet dinosaur?

It was great — the most financially successful animated franchise until The Simpsons — except, of course, dinosaurs died out millions of years before humans evolved. But kids who watched this show (well beyond the 1960s) might have gotten the idea that humans and dinosaurs were alive at the same time. This belief is a common example of a science misconception.

Things that we believe to be true, but which are not true, are misconceptions. Misconceptions can actually change the way we see the world. When we learn something, we filter it through what we already know. So if you, for example, believe that early humans lived alongside dinosaurs — as did 53% of Americans in 2008 — you might guess that the need to outrun and outsmart dinosaurs drove human evolution.

But getting kids (and adults!) to unlearn misconceptions is tough. As professors Philip M. Sadler and Gerhard Sonnert write, “learning is as much about unlearning old ideas as it is about learning new ones.”

Misconception: Science is a collection of facts that we know about the world.

Actually, science is a dynamic body of knowledge and set of practices that help people explore and understand the world. Scientists constantly revise their findings and generate new questions to explore.

This is a really important one! Science literacy matters more now than ever. But how do you ensure your kids are scientifically literate? It’s not just about teaching kids facts and names, but also teaching them to discover the world by asking questions about it and investigating it. Science is a practice, not an encyclopedia of information.  Another definition from the National Academies Press book, “Scientific literacy means that a person can ask, find, or determine answers to questions derived from curiosity about everyday experiences. It means that a person has the ability to describe, explain, and predict natural phenomena.” Kids are naturally curious, so when they’re asking you a lot of questions, just remember it’s part of their learning process.

In a 1980 video, A Private Universe Space, kids can observe seasons resulting from the tilt of Earth’s axis.

Misconception: Bats are pests to humans. They bite them or drink their blood.

In truth, bats help people more than harm them by keeping pests like mosquitoes in check. There is a common fear that bats are dangerous pests. It is easy to see how this misconception arises, with bats’ close association with Halloween and vampires. But bats actually help control harmful pests. A single little brown bat can eat hundreds of mosquitoes in a night. Including a friendly little brown bat in Mammals felt like a good opportunity to properly introduce a commonly misunderstood animal.

Misconception: If you could touch a cloud, it would feel solid. Rain is squeezed from clouds.

No, no, clouds are not solid. They are collections of tiny water droplets or ice crystals. There are variations on this misconception, but at the heart of it is a misunderstanding of what a cloud is. Cartoon depictions of creatures (Care Bears!)  standing on clouds and many elementary school craft projects don’t help. When we asked kids what a cloud feels like, one 9-year-old told us that they feel like cotton. In our app Weather, the clouds appear transparent. You can go inside of a cloud and see that it’s formed of water droplets or ice crystals. And to dispel the idea the rain is squeezed or falls out of clouds, we show how rain forms as the droplets comprising clouds knock together, grow in size, and fall.

Misconception: Skyscrapers are dangerous places to be during storms and earthquakes.

Actually, modern skyscrapers can withstand earthquakes, hurricanes, and more. Balancing technologies like mass dampers keep them from swaying.
Many of the world’s most famous skyscrapers, including Taipei 101, stand in storm and earthquake-prone areas. We wondered how they stay upright. In fact, modern skyscrapers can withstand incredible force. Deep foundations steady them when they sway, and clever balancing technologies prevent them from wobbling too much. Aloft in a skyscraper, one is safe from falling debris and buildings, too. Kids can test foundations and tuned mass dampers in our Skyscrapers app.

If you’re guilty of believing some of these misconceptions as facts, you’re not alone! See how your science literacy stacks up in this Pew Research science quiz. 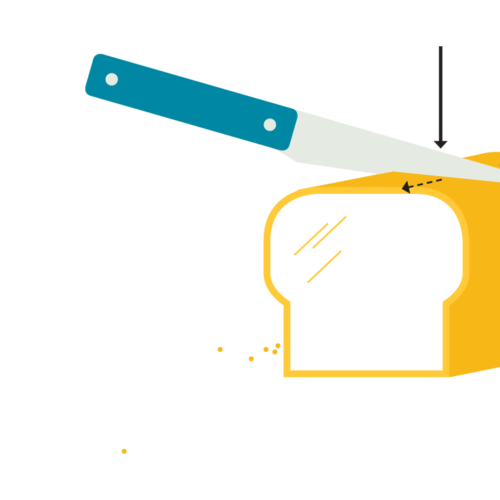 In Simple Machines, kids split an iceberg egg in half with different wedges. With this printable activity, you and your kids can see how a wedge works together.