The making of The Robot Factory

We love robots at Tinybop and know kids do, too. If you ask kids about robots they will sometimes refer to them as both friendly and scary (and sometimes in the same sentence!). Robots are vehicles for kids’ imaginations. Many kids see robots as versions of themselves. Researchers have even concluded that kids’ feelings about robots can inspire learning.

In our exploration of the subject we found hundreds of existing robot apps, but in playing these apps with kids we couldn’t find any that allowed kids to do the two things they really wanted to do: to build their own unique robots and bring them to life. Kids wanted to put arms and legs and heads wherever they wanted, in mad configurations. A kid’s robot might have a dozen arms, two tentacles, and an eyeball. Kids wanted these weirdly configured robots to walk or fly or jump. It turns out that accomplishing these tasks in an app is a meaty and fun problem to untangle.

And so, we began creating The Robot Factory, the first app we’ll be releasing from our new series, Digital Toys.

We started by contracting Owen Davey (you might know Owen as the illustrator of TwoDots) to draw a cohesive set of robot parts. Our robot team then had to figure out the physics of these parts. How does a spider leg move versus a humanoid leg? Next, the team had to create a system that allowed everything to connect. And finally, we had to make these robots walk and fly and dance logically, based on their construction. This brought up all sorts of interesting conundrums.

The beauty of this system is that we didn’t know and will never know all the end results. Kids surprise us every day with their creations. In The Robot Factory, children can make robots that are scary, funny, sad, fast, slow, or just plain weird. After they’ve built them, they can save them or destroy them.

As the app took shape we recognized one constant. Kids started telling us stories about their robots: stories of robot friends, robot supercats, robots who save the world, and of those who would destroy it. None of these stories are ever the same and that’s how we know we’re doing our jobs.

Sign up to get a heads up when The Robot Factory is ready to play on Thursday, April 9th. 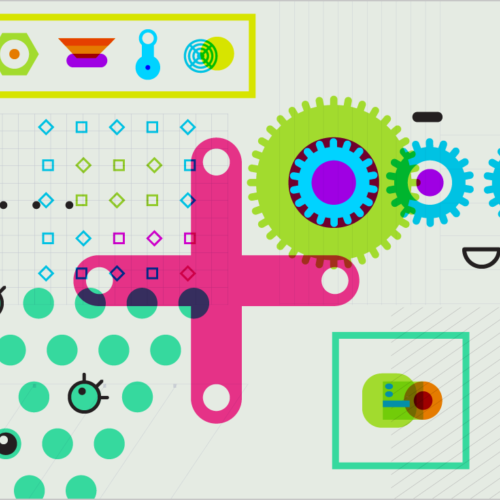 We’re getting ready to release the first app in our second series: Digital Toys. While we’re bringing it into the world after releasing three apps in the Explorer’s Library, Digital Toys was the first series we sketched out and we're really excited about it.