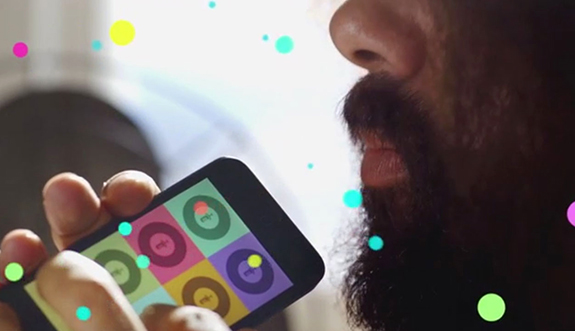 Make music from anything.

I’m a tentative musician—intimidated by people who easily break into song: karaoke experts, friends who randomly beatbox at a party, and liberated shower singers.

Keezy, a beautiful app from Elepath, helps me be a little less shy about creating tunes and getting playful with music. The app allows you to record your voice, a field recording, or any other type of sound and play it back on a color-coded sound board.

When you first open the app, you’re greeted with eight brightly colored rectangles. Each contains the symbol of a microphone. You quickly figure out that tapping and holding each color starts the recording. Once your sound has been recorded, you can hold it to loop the sound, tap it to stutter the sound, or tap it once to just play it outright. You can play multiple sounds at once like a piano chord, often to comedic effect, or rapidly switch back and forth between your recorded tones to create an elegant soundtrack.

On a recent night, my husband and his brother took turns doing family impersonations with each recording box, capturing favorite sayings of different family members. Playback (with stutter effect) resulted in hilarious, musical family “conversations” as keys were tapped out. This app is also super fun with kids, who love hearing their own voice played back to them. We tried it out with my four year old niece; her eyes lit up as she asked for it, “Again! Again!”

The app’s incredibly user-friendly interface is one of its best elements. You can explore pre-recorded sound boards, with several from notable musicians, including Reggie Watts and Francis and the Lights. You can save and name your sound board creations to make your own playlists. You can be as musical, percussive, or conversational as you want with each of the recordings which makes Keezy a great app for those with serious musical intentions and for those just having a little fun.