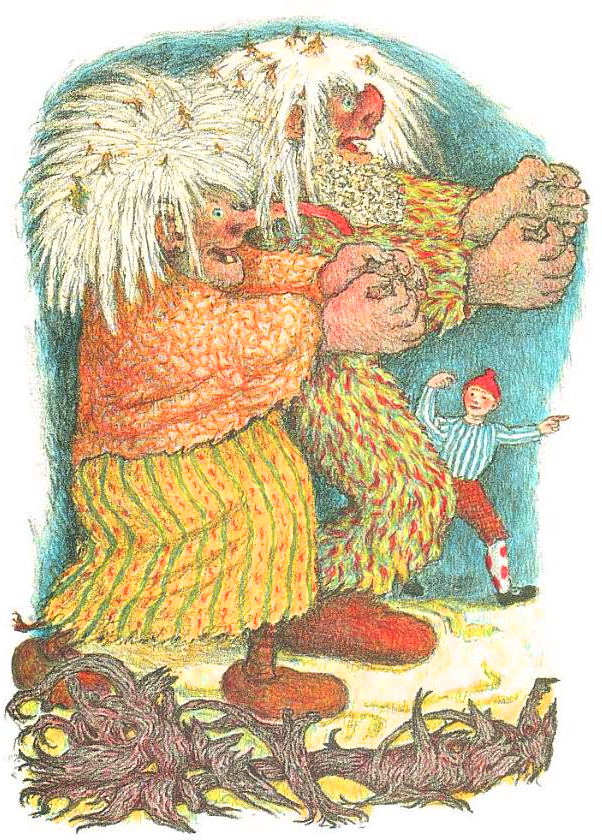 A lesser known classic by Ingri and Edgar d'Audlaire.

We’re big believers that myths, legends, and fairytales give children a framework for storytelling that can inspire a love of literature that lasts a lifetime. Ingri and Edgar d’Aulaire were master artists who specialized in foundational storytelling. Their Book of Greek Myths and Book of Norse Gods and Giants are beloved in the canon of children’s literature.

My children’s d’Aulaire favorite is the strange and wonderful Book of Trolls that explores old Norse tales of trolls, dwarfs and hulder people.

The distinctive look of the d’Aulaire books comes from a time-consuming lithographic process where illustrations were carved in 100 pound blocks of limestone. Color was added by acetate overlays. Great illustration alone doesn’t make timeless children’s literature; the story itself is equally wonderful:

“‘The more heads a troll had, the more trouble he had at mealtimes, for all his greedy mouths shouted, ‘I am hungry. Feed me first. It’s my turn!’ Since even a many headed troll had only two hands, he would be a very tired troll before the meal was over.”

The New York Times called The Book of Trolls, “a nearly perfect picture book for children.” We agree.

Find d’Audlaire’s Book of Trolls at your local library.