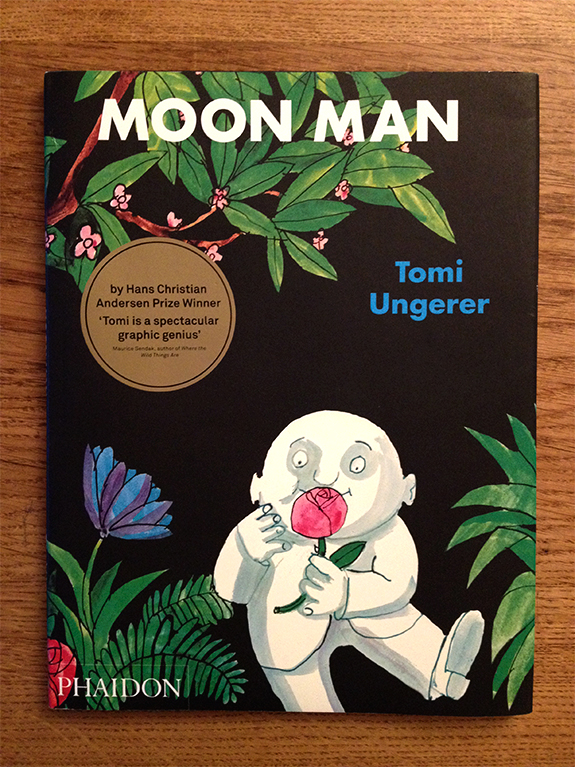 Moon Man longs to dance and laugh among the people on earth—until he does.

I collect children’s books. Tomi Ungerer’s are among my favorites. I love them because I love weird children’s books — ones that manage to strike that balance between being unique and classic at once, books that have a fully realized style, books that speak to larger, deeper human issues and aren’t preachy. It’s a tall order, I know. Tomi is able to do this repeatedly and I love him for it.

His illustrations initially caught my attention — they’re graphic yet cartoonish, elegant and goofy. It’s his sense of naïveté that captivates me. It compliments his stories — which are usually dark. Moon Man, for example, is not only a charming story of a man who visits earth but also a commentary on how human beings react to strangeness, and how lonely the world can be for the misunderstood. It’s a little weird, a little funny, a little dark. The trifecta accomplished.

My favorite part of the book is the ingenious personification of the moon. He’s a charming, pale figure in a suit who actually changes shape over time. The man himself waxes and wanes and he often uses his shape to his advantage. It’s this sort of off-kilter detail that gets me. But I can’t explain how that detail is the crux of the book because it’ll ruin the ending. You’ll have to read it to discover how the moon man disentangles himself from his earthly misadventures.