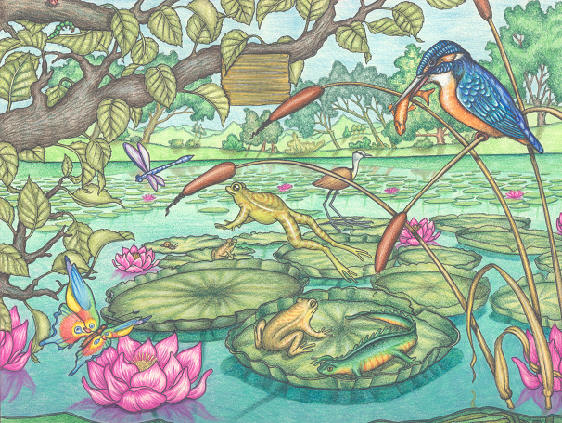 Puzzle Island is one of those reading experiences that sticks with you, long after the puzzle has been solved. In a Where’s-Waldo-meets-word-game kind of experience, kids and adults alike are drawn into the narrative of an explorer named Ambrose Fogarty who has hidden clues and a zoo of creatures within his illustrations.

Each page shows a different fantastical scene, surrounded by an alphabet border, and accompanied by an elegantly written letter from Mr. Fogarty. Readers are challenged to pick out the missing letters in the border, rearrange them into the name of an animal, and then find the hidden image of that animal within the illustration. As readers continue through the book, the letter unscrambling becomes more difficult, the creature names less well known, and the hidden images trickier to find. This increasing difficulty demands grit and determination on the reader’s part. But it’s all totally worth it in order to help the narrator, to solve the puzzle, and to save the species.

When I was eight years old, my family and I spent a solid week puzzling through each page, filling a notebook with my second-grade scribbles, trying to unscramble the words. We would pull out the book after dinner, blocking the light with our heads as all four of us crowded around, trying to get a good look. We spent quite a while stressing over unscrambling (SPOILER ALERT!) the mynah bird.

When you finish the last page, however, you have not yet solved the puzzle. Only after completing a final task—that involves a secret decoded message based on all of your previous discoveries, a poetic riddle that leads to more clues, and a few more problems to think through—have you done it! You have saved a species, decoded a secret, overcome a challenge, and worked as a team to do it!