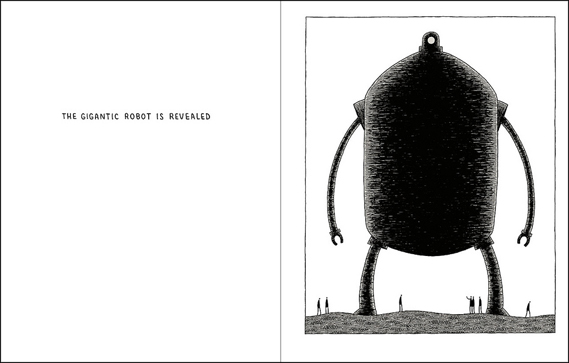 Unlike every other robot story you’ve ever read to your kids, this robot doesn’t talk, move, or do much of anything. In fact, the robot is never completed and the story ends up being a meditation on deep time. The robot is built. It doesn’t work. It isn’t finished, and it falls apart.

Despite the lack of obvious action, my kids instantly fell in love with this short tale as it leaves many questions open and invites the imagination to run wild. Soon, hand-drawn images of giant robots filled their own notebooks. This book is out-of-print but used copies can be found on Amazon or eBay. The British author and illustrator, Tom Gauld, is well known for his wry, and often darkly funny illustration style.

Find The Gigantic Robot at your local library.