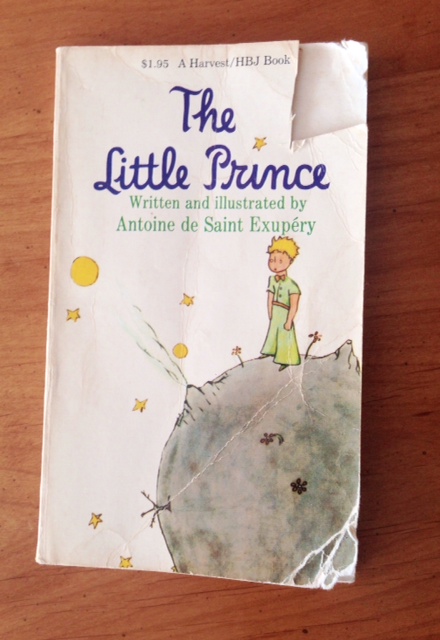 An encounter between a pilot and a prince in the middle of the desert.

My first copy of this book is yellowed, dog-eared, and drawn on. I crudely cut a rectangle out of the cover’s upper-right corner, and some pages look like they were gnawed. I loved it, terribly. It left me reeling with wonder. Understandably: upon re-reading it as an adult, I realized for as many lessons it imparts–about friendship, love, loss, and loneliness–it’s as full of unanswereds, unknowns, and unseens.

After crashing his airplane somewhere in the Sahara, our narrator meets a tiny, tow-headed royal. The little prince relays a series of stories about his interplanetary travels and refuses to reply to any of the pilot’s questions. He also describes his home life, in which, among other things, he tends to two active volcanoes and one extinct, because “you never know.” An anecdote about his friendship with a fox is summarized in a frequently quoted line, “What is essential is invisible to the eye.” And totally forsaking finality, the book closes by rejoicing in obscurity: “Here, then, is a great mystery….”

First published in 1943, one year before Saint-Exupéry disappeared in his Lockheed P-38 over the Mediterranean during WWII, the book has been translated into more than 250 languages. I recommend seeking out Katherine Woods’ English translation over Richard Howard’s more recent–and less poetic–version.

Find The Little Prince at your local library.