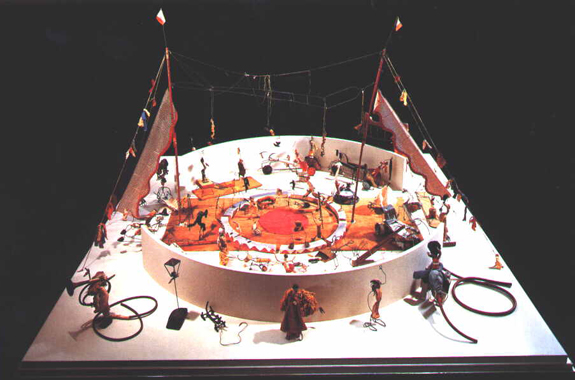 A magical, miniature, kinetic circus is captured on film.

In 1926, the artist Alexander Calder arrived in Paris and began to build his “circus.” It was an elaborate, miniature reproduction of a real circus made from wire, wood, cloth, cork and other found materials that he combined to create fanciful characters like tightrope walkers, dancers, ringmasters and weightlifters, as well as elaborate props like trapezes that swung from end-to-end carrying acrobats along with them. The circus melded elements of children’s toys with dioramas characterized by kinetic movements that would later dominate his sculptures.

During the early '30s, Calder traveled with his circus and performed live shows in New York and abroad that garnered a large audience of adults and children alike. Filmmaker Jean Painleve captured Calder’s circus on film in 1955 (available on YouTube in two clips, Part I and Part II) and it continues to bring the artist’s imagination and entertainment into everyone’s homes to this day.

The troupe and stage of Calder’s circus is also housed in the collection at The Whitney.