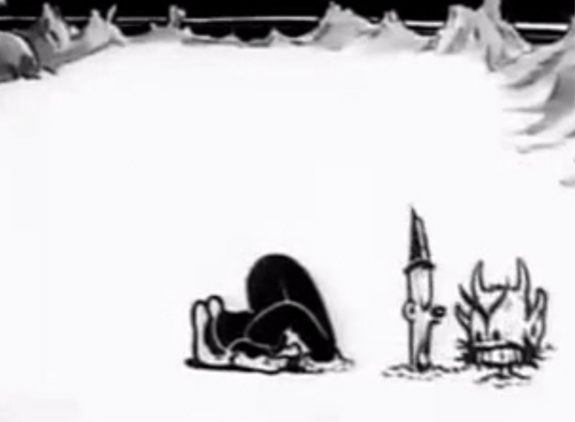 Fleischer Studios (or Out of the Inkwell Studios, depending on the era) was an NYC-based animation studio fronted by Max and Dave Fleischer. They were an urban, seedier counterpart to the squeaky-clean Walt Disney, who hailed from Kansas.

While Disney was concerned with conveying reality through animation (farm scenes!) with a classical soundtrack, the Fleischers used animation as a medium to explore psychedelic possibilities, often set to the music of then controversial artist Cab Calloway. Fleisher Studios was exciting, because they weren’t afraid to represent nightlife, jazz, and other avant-garde ideas in children’s media.

This particular animation features Koko the Clown and Bimbo the Dog as they find the Control of Earth center. While Koko plays with the weather, Bimbo locates the switch to end the earth. Though Koko tries to stop him, mischievous Bimbo pulls the switch anyway and the duo find themselves in a mind-bending wasteland of what was once the planet! In a humorous twist, they end up back where they came from—a paintbrush and a blob of ink.