A conversation with illustrator Mike Ellis

Mike Ellis is an illustrator, living in Berlin but originally from Toronto, Canada. Mike studied at OCAD University in Toronto, where he now teaches an introductory course for illustration.

He’s also the artist behind Skyscrapers.

We had the pleasure of chatting over the miracle of Google Hangouts. Here's what he had to say.

Can you talk about your process for Skyscrapers?
My process started with gathering a lot of reference material, looking at color swatches, color combinations, different types of furniture, room layouts, that type of thing; it really started with the interior of the building.

The process changed as the project developed; it went from not only developing sketches and concepts for the final art, but also having to think about how all of that was going to look in the app.

In the beginning, it was really hard to even know what the the app was going to look like other than just text descriptions of things. By the end, it was pretty streamlined — some quick rough sketching and then just making a lot of objects and backgrounds on Illustrator and kind of just moving things around and seeing where things looked good.

So you started with basics, and then kind of delved into the details…
Yeah, I think in the beginning, like any other project, you’re at the top of the funnel, so your ideas are pretty large. A lot of what I was doing was really detailed. As the project progressed, we started realizing that we needed less and less detail.

I’m used to working on things that are a single image, where you don’t have any restrictions; so it was kind of interesting to go from the beginning, where there were no restrictions, and then adapt to the format.

What is your favorite part or feature of the app?
I think that my favorite part is the the elevators, just seeing them go up and down. As a kid, I was always really into seeing the inside of things, and then the outside. So the sliders are also really cool — you can slide them and see what it looks like on the inside and then the outside. And also the skyline — I really like the idea of being able to make all these different buildings and then move them around, change them up and see them all as a skyline.

What were your inspirations for Skyscrapers? Did you have any specific cities or buildings in mind? Did you use anything as a visual reference?
In the beginning I was looking at a lot of major cities — obviously New York, Chicago; but then there was Qatar, Hong Kong, Dubai — you know, cities that have newer skylines. It was a lot of back and forth when I started doing the facades and tops. I started with ones that were loosely based off of the Empire State building, in New York, and the Big Ben clock tower, in London, and kind of adapted those so they wouldn’t look exactly like either building.

How is Skyscrapers unlike anything you’ve worked on before?
I’ve never finished an app. I started a personal project before but never got to finish it; so this is the first fully interactive artwork that I’ve ever completed. Before, I’d done books, installation artwork, and interactive artwork, but never interactive digital content. So it was definitely a very interesting process — very cool but also very different and quite a learning experience.

What does it feel like as an artist to have your art be interactive in that way?
It’s awesome! I think that this is kind of a direction that a lot of art is moving into, and should move into. And I’m hoping that this is the first of many projects involving interactive art. The educational aspect is also really great, giving kids the opportunity to learn about something while interacting with it is very important. It’s a wonderful thing to see it — it’s something that we should see a lot more of.

Speaking of kids, what do you think is the most important thing to keep in mind when illustrating for them?
I guess it’s simplicity, especially for this age group – not to overwhelm and to kind of leave space for their own imagination. So, simplicity, form, and inviting color palettes.

What’s the most exciting part about illustrating for kids?
Looking back at my own childhood, I remember how important certain books, or certain animated movies, and even artworks on walls were to my own artistic development. I think that illustrating for children is a really unique opportunity because you get to inspire and engage young people at an important time in their life. Perhaps certain things will stick with them and perhaps certain things will shape the choices they make in their own life. So it’s a really unique opportunity because that’s the only demographic you have that with.

When did you start illustrating?
Well, I’ll kind of give the answer that I’m sure every illustrator gives, which is that I started illustrating when I was a child. But I mean, that’s true. I was always really into drawing things that explained something. I even remember drawing maps a lot, creating games on paper, and drawing top-down views of things.

I was really into battles and stuff so maybe I’d draw a [top-down view] of a sea and ships and the movements of the ships. I’d make up these imaginary battles or scenarios in my head. So I wasn’t always drawing what I saw, but I was always drawing things I was thinking of. And that’s really what illustration is: being able to communicate key ideas with images.

What were some of your earliest influences?
I was really into Stephen Biesty, he’s an English technical illustrator who did books like Everything Incredible and things like cross-section illustrations. I thought that was the coolest thing — being able to see the insides and outsides of everything. And as a kid, I was really into construction — I think a lot of boys are — and the idea of being able to look inside things, it just made my imagination explode.

I also really loved Richard Scarry and his books about cities and all the ways that buildings and machines and people just fit together in a city setting. Those are the two really big ones off the top of my head right now.

Where did you grow up, and has this place influenced your art?
I grew up in a city called Barrie, which is North of Toronto, Canada. I don’t know how it influenced my art so much. It’s one of those places that is sort of devoid of culture so you kind of retreat into the world that you create.

So I read a lot and I did a lot of art and played music, especially in high school, as a lot of teenagers do. The environment itself though didn’t really inspire me as much as it inspired me maybe to leave it — it inspired me to look for bigger things. The one nice thing about it is that it had a lot of nature, so it gave you a lot of time to reflect.

So what do you think about Berlin as a source of inspiration?
Berlin is really cool. It’s a really interesting place and one of the first I've been where I immediately felt like I had been here before, or that I fit in here, or where I really, really quickly found my niche. It has a lot of great things, weird, experimental things happening, and there’s a lot of community in terms of creativity and creative working environments, as well as lot of great architecture and museums.

Was art a part of your childhood and if so, how?
I guess that as a young child, it was part of my life only because I did a lot crafts with my mom — from a really early age, before I even started school, up until like third grade, she would draw with me. I always kind of liked drawing and I guess I was always good at it. I was drawing for a very large part of my early childhood, but then I kind of stopped and did music for a long time. Then I kind of came back to it in my late teens and realized that I had a knack for it. But as a child, it was mostly my mother who sparked an interest by doing things with me.

What were your favorite books as a kid?
As a child I really liked I SPY books and similar Search and Find books. I really enjoyed how all these objects were laid out and photographed in really interesting ways. I could spend hours looking for things and just generally marveling at all the interesting objects these scenes contained. I was also really inspired by Chris Ware's work, nothing specific, just really like his comics and how he represents objects and buildings in a clear way.

And lastly, what advice would you give to aspiring illustrators?
First, be curious. Second, draw all the time. Third, know what makes you curious because those are often the things that will inspire you and set you apart from everyone else who is doing the same thing that you’re doing.

Thanks for sharing, Mike!

See more of Mike's work on his website.
In Skyscrapers, kids explore the tallest buildings in the world. Get the app on the App Store. 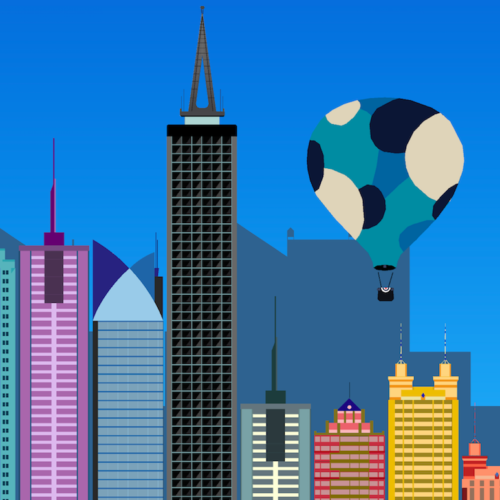 Skyscrapers is now on Google Play — free for 7 days — with 4 more Tinybop apps.