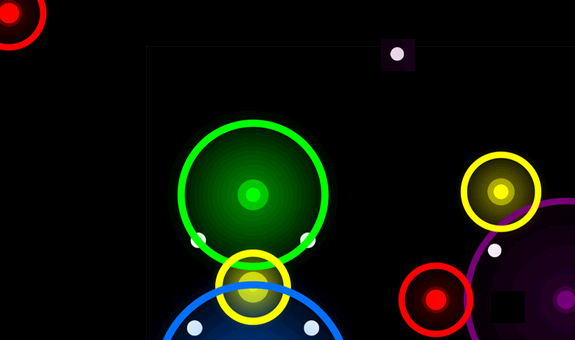 Relax with a deceptively simple game.

A friend asked me to recommend an iOS game for his seven-year-old. “She likes puzzles. Her mom hates video games,” my friend explained. Immediately Circadia came to mind. Circadia is a series of minimalist puzzles. There are no characters, nothing to kill or run away from, no blinking rewards. The screen shows only dots and circles. It’s a puzzle game about sound, light, and predictability. The game is easy to learn but difficult to master. My puzzle-oriented five-year-old took to Circadia immediately and is now much better at it than I am.

I like this as a game for kids because the game mechanics are so simple. Instead of getting frustrated when they are challenged, kids often persevere because they know the game is solvable. Note that this is a game in which sound is important (the tones are pleasing) so it’s best played in rooms that aren’t too noisy. The developer, a Parsons graduate, says the game was inspired by the idea of throwing stones into a pond and making ripples. I find throwing stones into water deeply relaxing. This game evokes that feeling. The developer writes that he was inspired by this theory of game development: “Don’t make them complicated. Don’t make them what they’re not. Just make them the way they want to be made.”

Read more about how this lovely game came into being here.