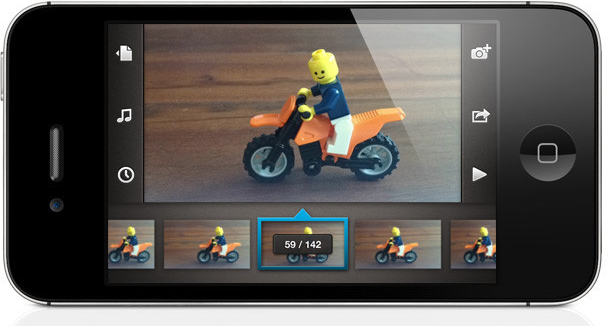 I have yet to meet a kid who doesn’t love stop-motion movies. There’s an inherent magic in making inanimate objects come to life and the process of creating stop-motion is a great introduction to filmmaking. All film is on some level stop-motion: a series of still images projected quickly.

In the past, creating stop-motion was time-consuming and technically challenging, but apps like Frameographer make the process easy and fun. The interface is simple enough for kids to be able to start making movies with just a little bit of guidance. I’ve tried many stop-motion apps and this is one has a well-crafted interface that makes sense to kids. It’s great for school projects and for animating those boxes of LEGO around the house.

One small complaint: Frameographer doesn’t allow kids to add a voice-over to their movies in-app. While it’s easy to add voiceover after finishing a movie with external apps, not being able to add spoken parts in-app feels like a missing feature. The omission has the positive side effect of forcing kids to concentrate on visual storytelling while crafting their animation (and we always add sounds later in iMovie).

If you are looking for an app with voice-over, try Stop Motion Studio. It’s less intuitive than Frameographer and occasionally unstable, but adding voiceovers when you’re done “shooting” is dead easy. One additional hint: stop-motion films are greatly improved by connecting your phone to a tripod. Studio Neat sells a tripod attachment, but if you don’t have access to an iPhone tripod, charging stands will often make do in a pinch.

Update: Looking for other features? The New York Times reviewed a few more stop motion apps. Be sure to run through these with your kids. They catch on quickly, but most of these apps were not designed with children in mind, so you might need to do a bit of hand holding.