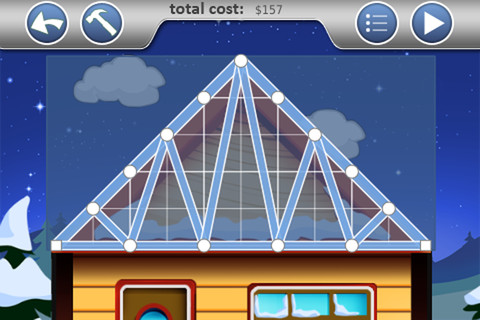 Simple Physics doesn’t teach straight physics. Rather, it challenges kids to build structures and then attempts to destroy them using forces of gravity, wind, explosive pressure, and age to see how well they stand up. Kids progress through the various scenarios by solving each level’s increasingly difficult engineering challenges. The physics elements of the app are realistic enough so it can be effectively used to teach basic engineering principals. With my own kids, Simple Physics has helped me explain the ideas of load balancing, flying buttresses, the basics of bridge design, and the use of breakaway walls to absorb force. The game is not designed specifically for kids, but mechanically-minded kids will take to it immediately.

The developer’s second app, Dummy Defense, is a sequel that challenges the player to protect a dummy through 32 levels of danger. The gameplay is identical, but there are many more threats that can harm your dummy.

Both apps use an in-app purchase mechanism for extra levels.