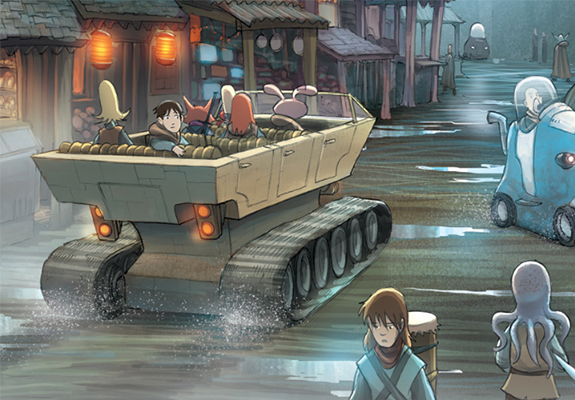 A graphic novel for young readers.

Kazu Kibuishi is rapidly establishing himself as THE graphic novelist for young readers. As the author of Copper and as editor and contributor of the Explorer and Flight series, he has demonstrated a knack for packaging stories for kids eager to dive into complex themes and big ideas. His Amulet series is a manga-inspired tale of a brother and sister who must rescue their mother from a tentacle creature that captures their mother and takes her through a mysterious door in a basement. As they follow the monsters, the kids discover a strange world under the house; an alternate universe full of creatures, robots, and talking animals. The kids later discover their mother has been poisoned, and must find an antidote. Along they way they find a mysterious powerful talking amulet. Eventually the kids become deeply immersed in a world that is at war with an Elf King and are enlisted to try to save it. This series is high fantasy and well suited for children who respond to the flights of imagination contained within. It can be an exhilarating journey.

Find The Stonekeeper, the first book in the series, at your local library.