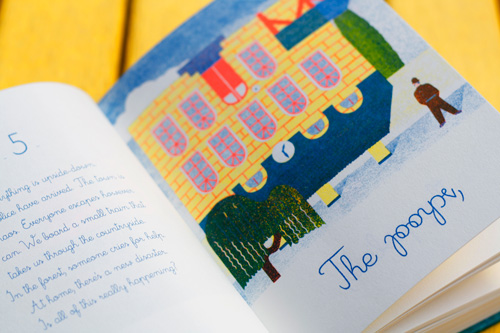 Ballad has already received many accolades since its release, including a spot on the New York Times’ list of best picture books of 2013. This book definitely deserves all the positive reviews due to its beautiful illustrations, refreshing simplicity, and magical settings.

Ballad starts as a story you already know, whose tropes have been featured in countless fairy tales: the castle, the forest, the town, the witch, and the queen. The book cycles through this familiar tale but adds a new element (like the omen, the sparks, the assault) with each repetition. As the story grows, fewer and fewer words appear alongside the colorful illustrations, allowing the reader’s imagination to fill in the blanks.

This book is an excellent choice for all ages, starting with pre-schoolers all the way up to the woman who was peering over my shoulder on the subway. Ballad is a must for anyone looking to stoke their imagination.

Find Ballad at your local library.