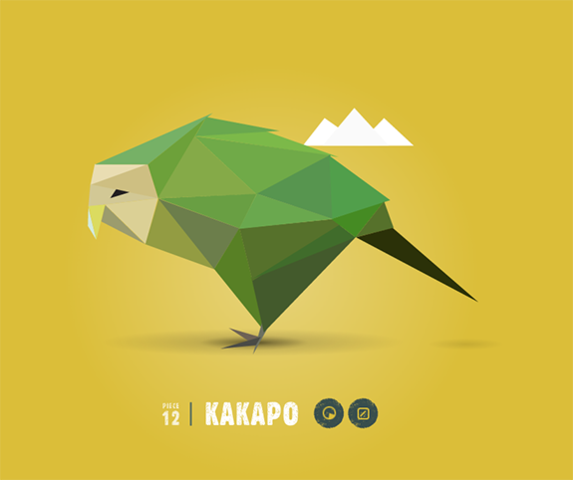 Have you ever heard of the Knysna seahorse, Pygmy three-toed sloth, or the Rainbow parrotfish? They’re three of thirty animals on the verge of extinction featured in Bryan James’ digital project, In Pieces. The site illuminates evolutionarily distinct, threatened species in a beautiful light, using smart digital techniques to create awareness of their plights. Each tangram-style animal is composed entirely of triangles (using CSS polygons*) and features a rich color palette, subtle animations, and a wealth of information about its remaining numbers and probable causes for extinction.

Browsing through feels like part-visual puzzle, part environmental lesson. While the future is less-than-bright for many of these animals, the site is a rich resource to explore with your kids. It helps explain how humans, climate change, deforestation, and other — both natural and man-made — effects are changing our world’s animal population. I remember learning about endangered species in elementary school, and though I was sad I would never know any of the animals, it did make me want to take better care of the planet.

*Nerds will appreciate that the site is made entirely in CSS, using CSS polygons. As James writes on the site, “…each shape is being morphed, moved and toyed with by a new set of co-ordinates, and as they are maintained as triangles throughout, this means 3 points, with CSS transitions to link up the movements…Point by point, shape by shape, each one has been handcrafted via a personally-created tracing JS function after illustration.”