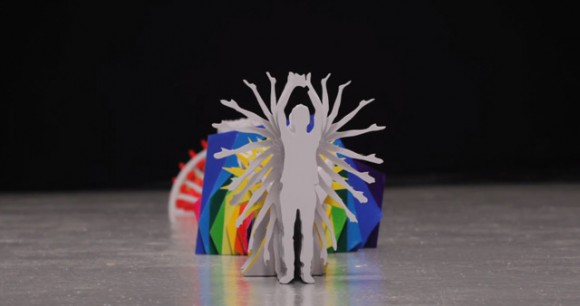 I first saw Shugo Tokumaru perform one late night at the Knitting Factory in Lower Manhattan in early 2006. His name was unknown to me at the time, and he appeared demure and shy on stage. But the moment he started playing his energetic, rhythmic, meticulously composed songs, the room came alive and I became an instant fan. Tokumaru’s tunes incorporate a huge number (over 100) both traditional and non-traditional Japanese instruments. He has been called a “psych-pop savant,” an “avant-popper” and “freakishly gifted” for the intricate dance he displays between vocals and instruments.

His newest video for the track Katachi on his latest album, In Focus, reflects the same kind of creativity, imagination and utter perfectionism that reigns in his music. Created by the Polish studio Kijek / Adamski, the video features 2,000 silhouetted shapes cut from PVC plates aligned to make a kaleidoscopic, progressive rainbow. Tokumaru says the shapes reflect various memories, both good and bad.

This video is crazy fun to watch (on repeat) and Tokumaru’s music is also fantastic listening for kids.