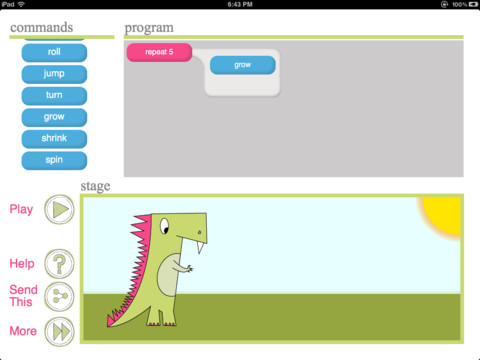 An early programming environment for kids.

Has your kid ever played a game and asked how it was made? This a great question, and—as I know from experience—a bit hard to explain. I always start by telling my kids that just like people, computers speak languages. Some people are able to learn and “speak” computer languages just as others talk in French, Spanish, or Korean. Daisy the Dinosaur is an app that helps add some meat to that explanation. With very simple controls, kids learn the basics of objects, sequencing, and loops. Many kids will quickly run up against this app’s limits, but it’s a fantastic introduction to basic concepts of programming.