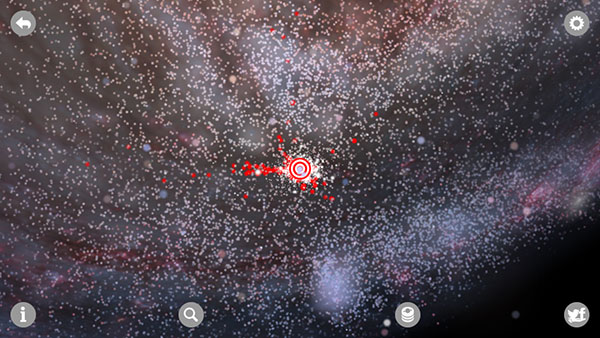 Exoplanet is a tool for visualizing the universe. The app was created by Hanno Rein, a young astrophysicist at Princeton’s Institute for Advanced Study. He originally wrote the app for himself so that he could pull up stats on the hundreds of known exoplanets (planets orbiting stars other than the sun). While not meant specifically for kids, the app is a great tool to help explain the shape and breadth of the universe as it manages to accurately visualize the entire database of known stars and exoplanets in a way that is comprehensible. Knowing each star on the screen is not just randomly generated, but was determined by the database compiled by the Hipparcos satellite that measures the position and distance of stars, makes the app a good catalyst for conversation about the vastness of the universe. The database of exoplanets is updated daily and alerts you when new exoplanets are discovered. Each of the planets in our own solar system is rendered with care. Moons are absent in Exoplanet (it has a planet bias!), but the app is continually being updated so they might show up in the future.

Note: Exoplanet is free, but there are a few banner ads within the database portion of the app. An in-app purchase removes the ads.