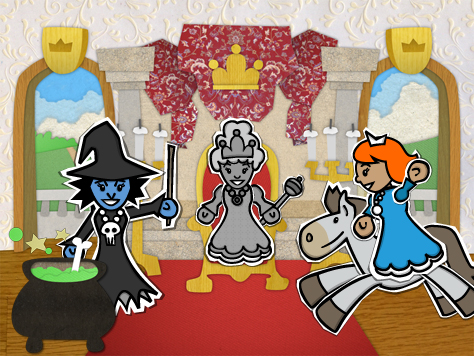 Kids create, narrate, and animate their own stories.

Tired of your kids begging you to use the iPad to watch movies? Have them create their own. Toontastic allows kids to animate or narrate digital puppets or their own drawings. The app also attempts to teach kids the basic elements of storytelling by giving them a structure to hang their story on. The UI is carefully designed for kids and requires little or no adult intervention.

My kids were instantly drawn to Toontastic and created scores of stories within a few hours of discovering it. They have continually returned to the app, telling, retelling, and refining their tales. The best thing about this app is that children really feel a sense of control. Give a kid a few quiet moments with Toontastic and it can start to feel like a window on their brain.

While the app provides some precanned scenarios and characters, I especially like that kids can create everything on their own, drawing their own backgrounds and characters. I’ll be recommending Toontastic to our local school as I think it would also be a terrific app in the classroom. It’s an excellent way to introduce the concept of story structure and to bridge the gap between informal play and formal writing.

A few notes:1. The app is free but extra characters and scenery sets are pushed fairly aggressively on the home screen (the app is perfectly usable in its free mode, but it’s nice to give kids a few add-ons to get them going).
2. One disappointment with the app is that it currently does not allow any way to export stories to a standard format, so you can share and save them outside of the app. You can share videos to a private YouTube network called ToonTube, but there no easy way to save the files to a common format. This, I believe, is short-sighted. My kids recently discovered a box of cassette tapes I recorded as a kid, narrating stories not unlike the ones they’re creating on Toontastic. Without export to a standard format, I doubt my kids would be able to do the same with the stories they create on Toontastic.